THIS UNITED STATES
Ömer Kayani
The British Prime Minister has been assassinated and the country is in mortal danger.  Enemies flood in to the country, assassinating people and terrorising civilians.  It seems like a giant power is determined to absorb Britain into its own system.  But who is running this gigantic operation? 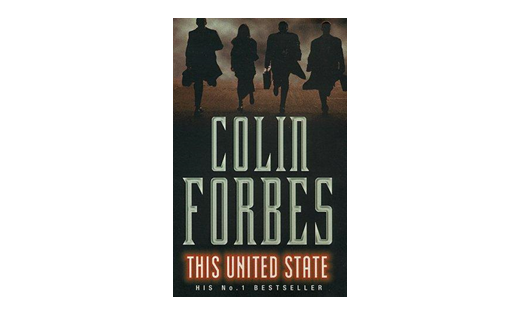 In the meantime, an invading US naval task force approaches Britain.  A group in British Intelligence monitoring the people going in and out of the US Embassy and Consulate, discovers a horrific plot by the US that is the part of a strategy to absorb Britain into its own system:  the operation consists of terrorising Britain with 50 different special terrorist and assassin groups smuggled in to the country until the country becomes ungovernable and the British Government has no other option but to invite the US forces for Britain’s protection.  Upon entering the country, the US forces will be able to easily invade Britain without any resistance and absorb it in to its system.

After noting that the above novel was written by a British author in 1998, when Turkey had been undergoing a post-modern military coup. Just recently Britain voted for Brexit, and is speedily moving towards becoming a colony of the US. Let us focus on our own country and adapt this novel to our own context.
a) On the 1st of March 2003, the US wants a decision to passed by the Turkish Parliament to deploy its 80,000 troops in Turkey. On the surface it was for removing Saddam Hussain from power in Iraq but in fact it was to invade every corner of Turkey.
b) Some members of the Turkish Parliament and Army resist this and the decision is not passed.  The US vows to avenge this decison.
c) American FETO starts Ergenekon and Balyoz operations against the Turkish Army as well as against some groups sympathising Germany and Britain (the brains behind the formation of modern Turkey)
d) Because there were so many innocent people alongside a handful of criminals locked up following the chaotic Ergenekon and Balyoz trials, recently everyone was freed regardless they are guilty or innocent.
e) They tried to imprison the Head of MIT (Turkish Intelligence) who made MIT operational globally first time in the history of Turkey.
f) 17-25 December 2013, by hiding themselves behind the corruption charges, they tried to topple the government by pushing country into the chaos and turmoil.
g) Western intelligence services disrupt Turkey’s peace talks with “Kurdish” terrorist group PKK.
h) In May 2013, they tried a civilian uprising in Taksim Gezi Park without success.
i)  Turkey’s opposition party CHP is transformed/connected to DHKP-C (a leftist terrorist group trained and supported actively by EU countries).  The party is taken over by sympathisers of the Syrian Government and join forces with “Kurdish” terrorist group PKK to terrorise its own people.
j) Devastating terror attacks take place intensively by PKK/PYD/ISIS in order to bring the Turkish government down.  Many US and Western mercenaries who fought against Turkish Army in our South-eastern region are killed.  Following the martyrdom of more than 400 Turkish people, the South-eastern region is saved from the US controlled PKK/PYD.
This is a brief history of recent events as they happened.  Now it is the last leg of a plan â€” a direct attack is being plotted.  All the previous plots were failed.  Let us remind you that recently the US requested to use the Incirlik Airbase for ISIS operations.  The Turkish Government accepted this after some resistance but also accepted German assistance to help ISIS operations who are also deployed in Incirlik NATO base, probably to create a check and balance against US forces.
Now the commander of Incirlik airbase has been arrested because the tanker planes that enabled the F-16 fighter jets to stay in the air for long hours to bomb key installations and civilians in İstanbul and Ankara took off from this Incirlik Airbase.  That is the reason why the Incirlik Airbase was urgently closed after the military coup attempt.  It tells a lot that while Incirlik Airbase was forced to shut down, Turkish Airlines flights were flying freely.  It is also important to remind that, the US keeps its nuclear weapons at this base.
On the night that Turkey re-started peace talks with Russia, 28 June 2016, when International airport in Istanbul was attacked by “ISIS” as if it was conveying the message that the next major attack was going to be airborne.  (we are referring F-16 and helicopter attacks during the coup attempt)
Without hesitation, Turkey is fighting with the Anglo Saxon US/UK coalition and an alliance of crusaders who forget all their differences and join forces like wild animals when the target is Turkey.
The western world is in a financial crisis and wants to take down the central resistance of the Islamic world with them.  That is why, while Muslim people from Kosovo to Palestine are taking streets to support Turkey, those lap-dogs of the western world such as Egypt’s Sisi cannot even stand the thought of a phoney United Nations decision condemning the military coup.
These increasing attacks on the Turkish Government arise from the fact that it refused to renew the strategic slavery agreement with the US, first signed by coup generals in 1960 but backdated to 1957 to hide their betrayal.  These attacks are increasing in order to bring Turkey on its knees before the new economic crisis that will give a new shape to the world.
It is time for a ruthless resistance against the west
Especially the British and US embassies should be sieged (without harming) and everything should be monitored by cameras.  Pressure should be put on.
The Incirlik Airbase should be surrounded by our people and the US personnel should be asked to leave if necessary; the nuclear weapons should be confiscated.
Let us remember that cowards cannot make history.  Lets remind you that coinciding with the Turkish coup attempt, there are rumours of a coup attempt in Pakistan (the only nuclear power of the Islamic army) and bombs are going off in the holiest sites in Saudi Arabia (the financial power of the Islamic army) to create a complete chaos.
The western powers that ruined the Islamic geography a century ago are at their weakest.  It is time to put aside our differences in order to come together to raise our flag that was fallen in 1918.

Interpret the news above as a message to our enemies who are having wet dreams: “We are ready to fight with you as the whole nation, we will fight with you street by street.”
Talking about enemies, whereabouts is the US 6th fleet?  Is it going to accompany the Russian and French carriers in the Mediterranean this autumn?
It is time to fight cleverly to resist the enemy…
For Turkish:www.yenisoz.com.tr